A and B represent elements in a diagram such as leaded and unleaded petrol, China and Australia, or nuclear and wind power. 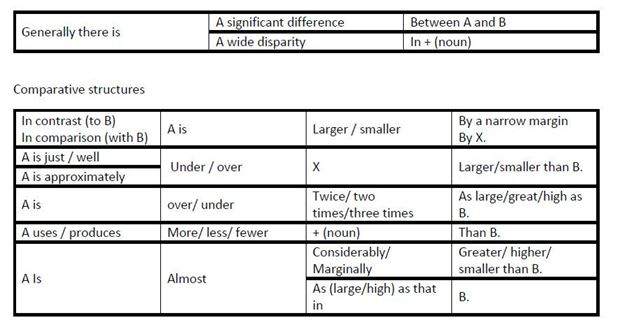 He is happier than me

He is slightly/ a bit/a little happier than me

I think listening is more difficult than reading

I think listening is a bit /a little /slightly more difficult than reading.

There are fewer supermarkets in country villages than in towns

There are more people in this town than there used to be .

He was advised to smoke fewer cigarettes and drink less beer

The film is (not) as good as I expected.

Being a nurse is not as interesting as being a doctor.

I don’t have as much money as he has.

you can visit as many historic places in Mashhad as in London .

There are not as many cars as it used to be .

There are as many immigrants as tourists in London .

The faster you drive ,the more petrol you use.

The more you eat ,the fatter you get

The taller the building ,the greater the fire risk.

The bigger the city,the higher the crime rate.

He is the greatest boxer that ever lived.

I asked the assistant to show me the most modern phone they had.

It is easily the best play I have seen this year .

She is easily the most experienced teacher in the school.

Who do you think is the least talented student in this class?

Ali made the fewest mistakes .Nick is the most cheerful and seems to have the fewest worries.

You complain that you make the least money here, but that is because you do the least work.

This is the least expensive car

The number of unemployed people doubled between 2005 and 2009.

There was a twofold increase in the number of unemployed people between 2005 and 2009. (adjective with the noun 'increase')

The number of unemployed people increased twofold between 2005 and 2009. (adverb with the verb 'increase')