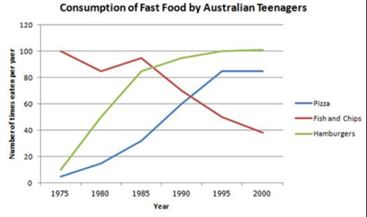 1.The line graph compares the fast food consumption of teenagers in Australia between 1975 and 2000, a period of 25 years. 2. Overall, the consumption of fish and chips declined over the period, whereas the amount of pizza and hamburgers that were eaten increased.

3.In 1975, the most popular fast food with Australian teenagers was fish and chips, being eaten 100 times a year. 4.This was far higher than Pizza and hamburgers, which were consumed approximately 5 times a year. 5.However, apart from a brief rise again from 1980 to 1985, the consumption of fish and chips gradually declined over the 25-year timescale to finish at just under 40.

As you can see there are 2 sentences in the introduction, the first sentence is the rewording of the topic and the second sentence, starting with “Overall” is going to talk about a general trend.

In the second paragraph it has been talked about fish and chips which was the most popular at first and we have an excellent chance to make a good comparison, since it is almost 100 times more than the other two foods. Then in the sentence 5 it has been more talks about the fish and chips in detail which is very wise.

the third paragraph started with an introductory sentence and turned the focus to the other foods.

Sentence 7 and 8 is a description of pizza and sentence 9 and 10 is all about the hamburgers.

There are 194 words for this report which is strong in length.