Reading and Use of English 2

1  Describe one of your aunts or uncles. What sort of relationship do you have with him or her?

2 You are going to read a short story about an aunt. For questions 1-6, choose the answer (A, B, C or D) which you think fits best according to the text.

-  Read the whole story first for an overall understanding.

-  For each question, eliminate the options which are clearly wrong, then check the option or options you have not eliminated.

-  If you still cannot decide, choose one of the options. 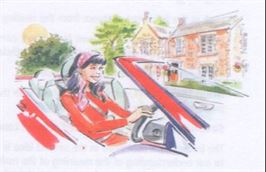 It was early June and Aunt Georgia, who lived down in London, came to help with the preparations for my sixteenth birthday party. She was the beautiful sister, with thick black hair and eyes the colour of seaweed. She had been a ballet dancer in her youth and had kept her girlish figure. My mother was plump by comparison. Aunt Georgia arrived two days before the party in a fancy convertible sports car with the top down. She had married well and was not one to hide her wealth. She pulled off her silk headscarf, shaking out her long hair, then kissed my mother and me. 'I'm so excited,' she cried. 'Where are we starting?'

We started with the glasses. My mother's idea had been to decorate ordinary wine glasses with coloured glass beads. While we sat around the kitchen table gluing the beads to the stems by hand, we talked about my school, in particular my German classes. The latest addition to her collection,' my mother announced. The other language in my 'collection', apart from English, was French, which my Parisian father had always spoken to me. My mother was envious because, as she was always saying, she had no gift for languages. 'My French really isn't what it should be,' she said again now - and I thought she looked a little uncomfortable. 'Your Aunt Georgia was always the linguist in the family.' My aunt nodded and looked through the kitchen window at the garden. After a while, she said. 'I'm not sure about these glasses. They're a little downmarket, don't you think?'

A bit tacky. Why don't we drive into town today and get some crystal champagne flutes?' My mother smiled. 'Georgia, they're far too expensive. Half of them will get broken anyway. These are fine.' 'They'll be a gift from me,' my aunt said. 'It's Clare's sixteenth after all. We shouldn't cut corners.'

We ate lunch outside and my aunt asked me about my summer holidays. I told her about my planned trip to Hamburg. 'A school trip?'

she asked. 'Not exactly,' I said. 'I'm going to stay with my German penfriend, Johann.' Aunt Georgia frowned, and quickly changed the subject, asking my mother how she planned to decorate the garden. My mother told her about the candles we had bought. 'Candles?' my aunt said. 'We can do better than that, surely. We could wrap fairy lights around the trees, like they do in the Caribbean. Let's go into Manchester and look in Gamidges. I'm sure they'll have something tasteful. While we're there, we could look for a dress for Clare.'

'She's already got a dress,' my mother said. Aunt Georgia smiled. 'But is it something she'll want to look at in photos in twenty years? I wish I'd known earlier. I could have had her something made. I've got a wonderful tailor in London.' 'It's fine, really,' my mother said. 'It fits perfectly and it's a lovely colour for her eyes.' My aunt laughed. 'Oh darling,' she said to my mother. 'If only you knew about colour. It's the wrong tone for her skin. Anyway,' she added, looking at her watch, 'we'd better get going.'

My aunt went upstairs to freshen up and I asked my mother: 'Why do you let her speak to you like that? She's been getting at you all morning.You should stand up for yourself.' My mother started to put the wine glasses back in their boxes, avoiding my eyes.

'Daddy was Aunt Georgia's French penfriend,' she said. 'They wrote to each other for a year and she was crazy about him.'

That's right. Then, the summer she was sixteen he came over to stay. The problem was ... '

'He fell in love with you instead.'

My mother nodded. 'We'll get the glasses and the fairy lights, but the dress is up to you.'

1What does Aunt Georgia's choice of car tell us about her?

2In the second paragraph we learn that the narrator's mother

3Why did Aunt Georgia disapprove of the wine glasses?

4When the narrator mentioned her German penfriend, Aunt Georgi:

5What did Aunt Georgia suggest when talking about the dress?

6What does the narrator's mother suggest is the main cause of Aunt Georgia's behaviour towards her?

Why do you think the narrator's mother says 'We'll get the glasses and the fairy lights, but the dress is up to you'?