Reading and Use of English 1 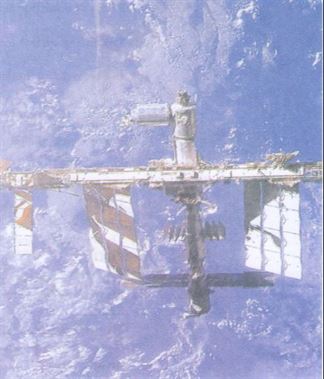 1  Look at the photograph of the International Space Station (ISS) and read the title and first paragraph of the article.

What would be difficult about each of the following on board the ISS?

2  Read the rest of the base text (the text without the missing sentences).

Which of the topics in exercise I are discussed? Does the article mention any of the ideas you spoke about?

Ltfe aboard the International Space Statton

The first residents arrived at the International Space Station on 2 November 2000, but fewer than 200 people have first-hand knowledge of life on board. Only a fraction have stayed more than six months on the largest orbiting spacecraft ever built.

The images of weightless astronauts doing somersaults and chasing food through the air make it seem as though the space station is floating free from the pull of gravity. (1) It is forever falling to Earth and would crash-land if it were not moving fast enough to maintain a gentle curve around the planet. In orbit, things are weightless simply because they are all falling at the same velocity.

the space station has a permanent crew of six, so 15 the arrival of new faces is a cause for celebration.

(2) There is a subtle art to moving around without crashing into anything or anyone, knocking computers, equipment and other objects off the walls to which they are attached with Velcro pads.

(3) They can fly down the length of the station, straight as an arrow, without touching anything, except with their fingertips. People sit in mid air, tapping away at a computer, with only a toe hooked under a wall strap to keep themselves in position. Then, with a slight movement of the hand, they'll fl.oat up to another computer and carry on typing there.

In such close quarters personal hygiene is a must. but the weightless conditions make washing a delicate chore. Water droplets can short circuit electrical equipment, so many astronauts use wet wipes. Hair-washing is trickier. (4) Even Sunita Williams, who spent 195 consecutive days on the space station - a female record - had her long dark hair chopped to shoulder length. But it was still problematic. 'Washing took time; she says. 'I usually did it on a weekend when we didn't have a whole lot of other things to do.

It takes the space station one and a half hours to fly around the planet. (5) But after 45 minutes of daylight, a dark line appears on the planet, dividing Earth into night and day. For a couple of seconds, the space station is bathed in a coppery light and then complete darkness. Another 45 minutes later, and just as abruptly, the sun rises to fill the station with brilliant light again.

Because of the frequency of these apparent days and nights, a bedtime schedule is imposed by mission controllers. Each of the crew has a small cabin where they can hook a sleeping bag to the wall and settle down for the night. (6) Falling asleep can take some getting used to. Just as you are nodding off, you can feel as though you've fallen off a 10-storey building. People who look half asleep will suddenly throw their heads back andput out their arms. It gets easier with time, though. One Russian crew member even goes without a sleeping bag and anyone still awake after bedtime would see his snoozing form drift by, slowlybouncing off the walls.

3  Use context to help you work out the approximate meaning of the words and phrases in bold around gap 4 in the base text.

e.g. chore: an activity, something you have to do regularly

4  Six sentences have been removed from the article. Choose from the sentences A-G the one which fits each gap (1-6). There is one extra sentence which you do not need to use.

Before reading sentences A-G, try to predict the general content of each gap.

For example, the sentence before the first gap talks of the appearance

of the 155 floating in space, whereas the sentence after the gap explains the reality of the 155 falling fast through space. Perhaps, then, the missing sentence refers to this difference in some way.

A Men tend to get military cuts before a mission.

B However, even the most welcome visitors can cause chaos if they are inexperienced.

C Because of this, the light has a calming effect on the astronauts.

D Some strap pillows to their heads to make it feel more like lying down.

E Nothing could be further from the truth.

F For half that time, the light can be so blinding that astronauts reach for their sunglasses.

Would you enjoy life aboard the International Space Station? Why/Why not?

1a Complete each of these extracts from the article with a word from the box. Then check your answers in the last paragraph of the base text.

1asleep can take some getting used to.

2 Just as you are off, you can feel as though you've fallen off a 10-storey building.

3 ... anyone still awake after bedtime would see his form drift by.

b Which two words or expressions in the sentences in a above mean 'going to sleep'? Which word means 'sleeping'?

Fce grammar about the future