1  The following sentences from the listening all end with a question tag. Look at the words in bold. How are question tags formed?

2 1.62 Listen to the examples from the recording again. In which of the sentences in 1 is the speaker:

a asking a real question because he or she is unsure if the statement is true or not?

b expecting agreement to the statement, which he or she feels sure is true?

How can you tell the difference?

Read more about question tags on page 216 of the Grammar reference.

3 Add an appropriate question tag to each of the following statements.

3 You went away for the weekend, ?

1.62 Now listen and check your answers.

5  Practise saying the sentences with the same intonation as the speakers in the recording.

6  Write down four statements about your partner that you are sure are true and four that you are unsure about, adding a question tag to each one.

You went abroad for your holiday last year, didn't you?

A: You don't like heavy metal music, do you?

B: No, I don't. You're right. And you went abroad for your holiday last year, didn't you?

A: No, I didn't, actually. I went abroad the year before last. Last summer we stayed in our house in the countryside.

Reading and Use of English 3

1  Read the introduction to the reading text Mystery Donors on page 119, as well as the titles of the true stories A-D. What do you think happened in each story?

2  Read the text quite quickly and check your predictions in exercise 1.

3 For questions 1-10, choose from the stories (A-D). The stories may be chosen more than once.

mentions the desire of some people to thank the donor in person?

says that everyone who saw the 'gifts' was positive about them?

mentions an unsuccessful attempt by a newspaper to identify the donor?

says that people did not expect the 'gifts' to attract so much media attention?

mentions speculation about the donor's reasons for leaving the 'gifts'?

says that most people did not want it to be known who the donor was?

mentions people's worries about possible negative consequences of the 'gifts'?

mentions the appropriateness of the 'gifts'?

says that one person initially mistook the intentions of the donor? 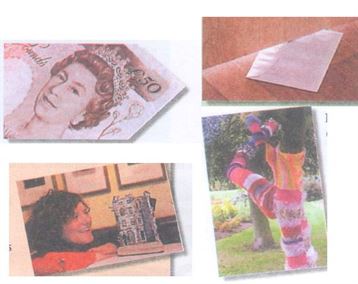 Between March and November 2011, a total of ten sculptures, beautifully crafted from books, were left anonymously in various cultural buildings in the city of Edinburgh.

Each was accompanied by a note, which included the words, 'In support of libraries, books, words, ideas and festivals'. There was unanimous approval of the intricate sculptures from all those lucky enough to view them when they were put on display.

Each sculpture was carefully and suitably chosen: a dinosaur for the National Museum, or a tiny cinema for the city's Filmhouse. Despite a strong suggestion in one of the notes that the donor was a woman, a local newspaper said they believed it to be a man. They claimed they had discovered the identity of the sculptor, but kept it quiet, given that the general view was that he or she should remain anonymous.

In January 2010, residents of West Cape May in New Jersey were amused to find that colourful, knitted scarves had mysteriously begun to appear wrapped around the trees and lamp posts in the town's Wilbraham Park. And the fact that the knitter preferred to remain anonymous only added to the fun. What surprised them was the huge interest shown by newspaper and radio journalists, who came from other US states and abroad to report on events.

While most local people reacted positively to the decorations, some residents expressed concern that the scarves might harm the trees and become unattractive with the effects of the weather. Although the scarf wrapping continued and spread to traffic signs and fence posts, by mid-March it was all over. The scarves vanished overnight, as quickly and mysteriously as they had first appeared.

In March 2012, the German town of Braunschweig began to capture the attention of the world's press. An anonymous benefactor had been donating money to local good causes, each time leaving the recipient an envelope containing €10000 in cash. Among the beneficiaries were the victim of a burglary, a severely disabled boy and a hospice, all of whom had appeared in the local newspaper. A total of nearly €200000 had been donated.

There were a number of theories to explain who the donor was and why they might have given the cash away: an elderly person with no family to leave their money to, a criminal wanting to get rid of stolen money or a lottery winner trying to do some good. Some of the beneficiaries wanted to meet the donor to express their gratitude. However, the local newspaper believed in respecting the donor's desire for anonymity and made no effort to discover their identity.

Just before Christmas 2011 a man entered a supermarket in Tiverton, England and handed out a number of envelopes, each containing a fifty-pound note, to delighted shoppers. Also inside the envelopes was a message which read: 'Happy Christmas. I have recently been fortunate enough to come into quite a lot of money - more than I need for myself and my family. So I thought that I would share some of it with you.' Believing it to be part of a marketing promotion, one beneficiary nearly threw the blank envelope away. Another went to the bank to check that the note was genuine. The donor's identity remains unknown, in spite of the efforts of one national daily, which asked readers to get in contact if they knew who the mystery benefactor was.

If you unexpectedly came into 'quite a lot of money', would you give some away?

If so, who would you give it to, and why? If not, what would you do with it?

FCE collocation with give