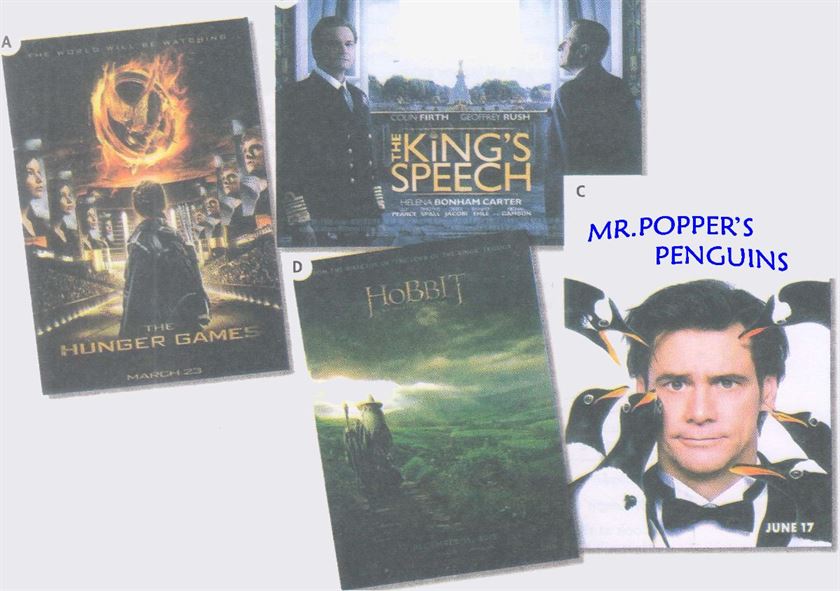 Aterrible terrific terrifying
1 It was a performance, for which he deserves to win an Oscar.

2 Absolutely ! I've never been so frightened in all my life.

3 This was probably the worst film I've seen all year. The plot was non-existent and the acting was
Breview criticism critic
It seems that every (1) I read of this film gives a different opinion. For example, the (2) who writes for The Times is very enthusiastic about it and has nothing but praise for Peter Jackson. The same director, however, comes under strong (3) in the magazine Premiere.

3   Read the following review of The Matrix, which appeared in a student magazine. Does this type of film appeal to you? 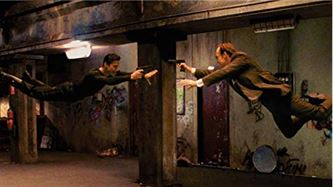 The Matrix is one of the most entertaining science fiction films I have seen. It combines frenetic action with terrific special effects, and stars Keanu Reeves as Neo, and Laurence Fishburne in the role of Morpheus.

The film is set in the future, in a world controlled by machines. In order to hide this reality from humans, the machines have constructed the Matrix, a vast virtual reality system resembling Earth at the end of the twentieth century. The plot, which focuses on a revolt led by Morpheus against the Matrix, is complicated and at times confusing. However, the cast is very strong and the film features a surprisingly competent performance from Keanu Reeves.

As for the visual elements, the special effects are stunning, with the main characters walking on walls and avoiding machine gun bullets. The action scenes, which include a wide variety of kung fu techniques, are convincingly choreographed.

I would recommend the film to anyone who likes science fiction. If you ignore the complexities of the plot and just enjoy the action, you will not feel disappointed

4 Complete each gap in 1-8 using the underlined words from the review of The Matrix. Do not change the words in any way. There is an example at the beginning (0).

0 Some of the scenes in Casablanca are memorable, particularly when Humphrey Bogart and Ingrid Bergman say goodbye at the end of the film.

1 War Horse is in England and Europe during the First World War.

2 The film has an international , with French, Polish and Italian actors.

3 One of my least favourite films is Notting Hill, which Julia Roberts as a world-famous film actress. I like the music from the soundtrack, though.

4 I found Hugh Grant irritating in the of a nervous bookseller who has an unlikely romance with the film star.

5 This was not Brad Pitt's most convincing acting

7 The are well portrayed by Colin Firth and Geoffrey Rush, and there's a fine supporting performance from Helena Bonham Carter as Queen Elizabeth.

8 SFX is the abbreviation for

5  Talk about the following using some of the vocabulary in exercises 1-4. TALK ABOUT IT

- a film you didn't enjoy

- the most frightening film you have ever

- the most gripping film you have ever

Language focus 1: So and such

These 'intensifiers' are used to give emphasis.

1So is used before:

aadjectives and adverbs without nouns.

You shouldn't eat so much, Jan.

2 Such is used with or without an adjective before:

She's got such a wonderful voice.

Our neighbours are such friendly people.

It was such a boring place that we decided to leave. It was raining so hard we had to stop the car.

Look at these two sentences.

I was so impressed with the soundtrack of the film that I downloaded it as soon as I got home.

She has such a wonderful voice that it seems a shame to dub her films into English.

a Why are so and such used in each of these sentences? FIND THE ANSWER

b What types of words follow so and such? FIND THEM

1 We decided to see the film as it had such good reviews.

The reviews for the film we decided to see it.

2 The weather was so bad that we decided to come home.

It that we decided to come home.

3 I got so absorbed in the film I forgot to phone Amy.

It film I forgot to phone Amy.

4 The party was so crowded we could hardly move.

There at the party we could hardly move.

speaking taking about photos which activity do you prefer