Why are the children being told off? 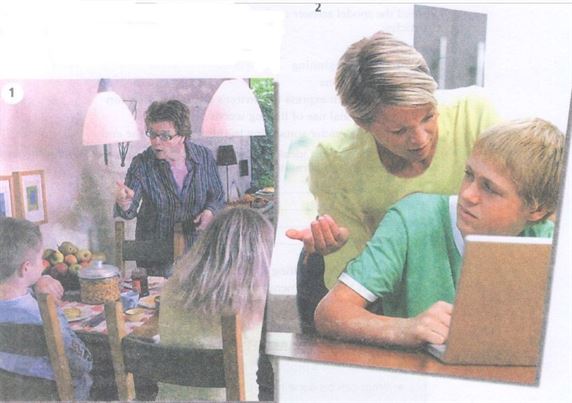 1  Look at the photographs, which show children being told off.

Student A   Compare photographs 1 and 2 and say why you think the children are being told off.

Student B  When your partner has finished, say how you think the adults are feeling.

2  Now change roles. Follow the instructions above using photographs 3 and 4 on page 137.

1  Read the text on page 204 and answer the following question.

What reasons are given for children telling lies?

2  Tell your partner about a time when you or someone you know told a lie:

What was the reason for telling the lie? What were the consequences?

3    You will hear five different people talking about a time when they told a lie. For questions 1-5, choose from

the list (A-H) what each speaker says. There are three extra letters which you do not need to use.

I was supposed to check all the windows were closed before we left the house for my swimming class, but I was rushing to get ready and I forgot. When we were in the car, my dad asked me if I'd remembered to do it. I didn't want to be late, so I lied and said I had. That morning we were burgled - lost all our 1Vs and computers. As soon as I heard what had happened, I owned up to my dad about lying - I felt so guilty, I had to tell him. Plus it was pretty obvious they'd got in through an open window - there was no sign of a forced entry anywhere.
When I was about five or six, I took a pair of scissors out of a kitchen drawer and cut off a big chunk of my hair in front of my friends. I'm not sure why - maybe I was just showing off, trying to make myself look big. I kept being asked the same question: 'Have you cut some of your hair off?' My mum, my dad, the hairdresser ... And I kept saying 'no'. I said it so many times, I almost believed it in the end. I thought I'd got away with it, but my mum told me recently she'd always known what had happened.
I once typed out a note to my teacher and forged my mum's signature, so I could get out of doing sport. I think I said I had a stomach ache or something. My mum found out and went mad. Like an idiot I'd created a file with the name 'sick note' on our main computer and she spotted it a week or so later. Why I didn't delete it, I have no idea - it was a stupid mistake. My mum was really upset. She said I'd used her to lie to my teacher, which was true, of course. I didn't have to do sport that day, though.
My mum gave me a hundred pounds in cash to pay for a school trip to France. When I went to give the money to the French teacher, I couldn't find it anywhere. I knew my mum would be angry with me, so I made up something about being mugged on the way to school. She phoned the head and they called the police. They realized fairly quickly I was lying, because the second time I described what had happened I got confused and it came out all wrong - not all the details were the same. I've never been in trouble with so many people in one day.
I remember when my neighbour came over a year or so ago. She knocked on my door and said she'd run out of flour and asked if she could borrow some. It was a Sunday afternoon and the shop on the corner was closed and she wanted to bake a sponge cake for her kids. Well, I did have some, and under normal circumstances, I'd have been more than happy to lend it to a neighbour in need. But she'd never done me any favours, and in fact, she'd been positively unfriendly to me on occasions. So I said I was sorry, but no I didn't have any flour, and if she hurried she might catch the shop down in the town before it closed.
Question No. /

A I insisted on my innocence.

B I did not want to hurt someone's feelings.

C I disliked the way I had been treated in the past.

D I made some money by telling a lie. E I lied because I was in a hurry.

F I did not lie intentionally.

G I gave two different versions of my story.

H I should have destroyed the evidence.

4   Have you ever told any similar lies to those of the five speakers?

1    Look at the listening script on page 233 and use the context to help you guess the meanings of the phrasal verbs in bold.

Own up means to admit or confess that you have done something wrong.

2   Record the phrasal verbs in your notebook. Include the definition and the sentence from the listening script in which the verb appears, as in the example in exercise 1.

No one admitted to breaking the window, so the teacher said that if the person responsible did not ___ , the whole class would be punished.

4  Show your sentences from exercise 3 to another student, who will complete the gaps.

1  Infinitive forms (to do, to be doing, to have done) can be used after the passive of a number of reporting verbs to talk about beliefs and opinions which are shared by many people.

Young children are known to lie to avoid punishment.

This has the same meaning as:

It is known that young children lie to avoid punishment.

Change the following sentence in the same way.

He is believed to have made up the story about being mugged.

Read more about the passive of reporting verbs in Con page 217 of the Grammar reference.

2 For questions 1-5, complete the second sentence so that it has a similar meaning to the first sentence. Be sure to use the correct form of the verbs in bold.

1 It is believed that continual nose touching indicates that someone is lying.

Continual nose touching is that someone is lying.

2 It is said that people who repeatedly cover their mouth are trying to hide the truth.

People who repeatedly cover their mouth to hide the truth.

4 People think that we use fewer hand gestures when telling a lie.

We fewer hand gestures when telling a lie.

5 Everyone knows he lied because he kept moving about in his chair.

He because he kept moving about in his chair.

3   The statements in exercise 2 are believed by some people to be myths, widely held beliefs which are simply not true. What do you think?

what to write for an opinion writing